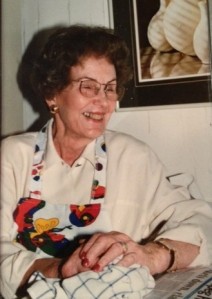 After a night sleeping in grandma’s bed, her alarm clock ticking sharply, the best part of the sleepover was the pancakes. She would pull over one of the chairs from her kitchen table and that would be my perch to reach the counter.

She’d add the flour and eggs, baking soda and milk and then the magic ingredient: a little Sprite “to make them extra fluffy,” she said.

Butter was somewhat of a religion in my grandmother’s house, browning it next to God. So when it came time to fry up the pancakes, trust me when I say there was no shortage of it. When her orange pan was sizzling, she would drop the batter in, the chair by now moved to beside the stove so I could watch it fry.

I would usually be wearing one of her nighties, and my hair would still be pinned back in pin curls, which she would lovingly roll the night before after letting me take a bath with as much hot water as I could possibly fill into her tub. My grandma’s fine, blonde hair would be tucked in curlers and then wrapped in a blue babushka to keep everything set.

When the pancakes were ready, she’d set the table and we’d sit down. She’d let me pour as much syrup as I wanted on the cake and then I’d bite into it, feeling the butter in the crisp, browned edges, the center airy by comparison.

After breakfast, grandma would get ready for the day as I lounged around watching TV, my lips still sticky with syrup. Usually by then, my Auntie Pam would show up wearing dramatic earrings, the most perfect shade of tangerine lipstick and with the collar on her blouse pulled up in a way very few women can truly pull off. She’d get some coffee, and a few minutes later my grandma would emerge wearing a crisply-ironed blouse and a long skirt. My favorite was an auburn one with a comforting pattern.

“We’ll be downstairs if you need anything,” she’d say in a voice that was light and, at least with me, seemed always on the verge of laughing.

My grandma owned a women’s clothing store called The Original Shop, which was downstairs from her apartment. She ran it for more than 50 years and there was always action going on, with the wind chime above the door, shaped like a Chinese pagoda, announcing the arrival of another customer. My Auntie Pam and grandma would greet the customers as old friends, and my grandma would usually start chattering in Ukrainian. Whether they were there for some casual clothes or to get fitted for a mother-of-the-bride dress, my Auntie Pam and grandma could gently steer them in the right direction.

While they worked, I had the pure luxury of knowing I could do anything I wanted. I’d go into my grandma’s bedroom and try on her lipsticks, blue eye shadow and rings. I’d get a Mirage chocolate bar from her fridge and eat it while watching “Days of Our Lives.” I’d read the poem “Footprints in the Sand” she had hanging at the end of the hall and feel deeply introspective.

Despite the street traffic on Selkirk Avenue, the apartment was always unusually quiet once grandma left it, so it wouldn’t be that long before I’d get dressed and head down to The Store, as they called it. My grandma would never be annoyed that I’d come to hang out but would welcome me behind the counter — a privileged space — and she’d introduce me to customers. Before long, she’d take me across the street to get a jam buster donut, the center still warm, or to The Windmill restaurant, where I’d get a root beer float.

My grandma was one of my most favorite people growing up, and sometimes I wrestled with the fact that I might love her more than my own mother. She was always so patient and indulgent with me, letting me give her manicures, letting me jump on the bed, cooking me macaroni with breadcrumbs because she knew I loved it. But more than indulgent, she was elegant and, up until the end of her life, was called “the last of the ladies.” She had beautiful manners, was an incredible hostess, but was a tough businesswoman and spurred, with considerable force, her three children to make something of themselves.

At the age of 99, she died in her sleep last week. As I watched her coffin descend in the little plot in the little cemetery in the little town where she’d been born, I thought of the best advice I’ve probably ever been given. “Be honest and work hard,” she’d told me.