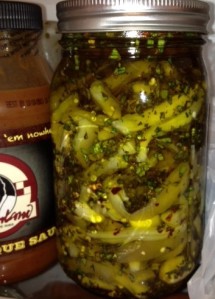 When I was a teenager, weeknights at the Kaprowy household were packed with the constant rotation of homework, piano practice, hockey games and baseball tryouts. But I was lucky enough to have a mom who balked the trudge of routine whenever she could, and one of the ways she did this were the nights she would come home carrying a bag from Pasta & More.

Usually, it was a cold, snowy night and, around 5:30, in would walk my stylish mom wearing her lamb’s wool coat and peacock blue leather gloves. My little brother Matthew and I would be dedicatedly watching TV downstairs, surprisingly alive given all the toxic fumes we’d created after building a fire using squirts of used motor oil in the fireplace (sorry, environment).

My mom would change into house clothes and then start making dinner. The fact that she had to immediately switch gears from her often-stressful job as a social worker to chef of the Kaprowy house could explain why cooking wasn’t my mom’s favorite thing to do in the world. Do it she did, however, dutifully turning out everything from perogies to roasted chicken breasts sprinkled with lots of Lowry’s seasoning salt.

But Pasta & More nights were special. The store was a place intended for women just like my mom. The owners would prepare the homemade pasta and sauces for the customer so all he or she had to do when they got home was boil the noodles and warm the sauce. I never met the owners, actually never even went to the store, but I can say someone was in that kitchen who knew a thing or two about deliciousness.

While the fresh pasta, which cooked after a 2-minute roll in boiling, salted water, was an exquisite treat, the real gift was the spicy pickled eggplant and artichoke sauce my mom would always buy.

Up until that point, our palates in the Kaprowy house were decidedly limited. My dad was a picky eater with an exclusively meat-and-potatoes appetite, so generally our dinner consisted of what he preferred. But on the nights he worked late, which were increasingly often in my teenage years as he established his practice as a psychologist, my mom was free to introduce us to new things.

The pickled eggplant sauce was a prime example of this. I’d never tried eggplant before and had only had artichokes in warm dip, whose sour cream and mayonnaise so effectively overpowered the poor artichokes I honestly didn’t know if I liked them or not. But the first time I tried this sauce, I knew I did and that eggplant was my new best friend.

For those of you who’ve never had eggplant pickled, it is worth seeking out. The time in the vinegar lends it a pleasant tang, the red pepper flakes a softish spice and the pickling process itself completely transforms the texture of the eggplant, so it’s firm and meaty. The sauce was speckled with chopped red pepper, plenty of garlic and some type of cream base, one not so thick it was heavy, but just enough to give it a luscious dazzle.

It was the best part of our weeknight — and likely one of the dishes that turned me into such an avid foodie.

I remembered all of this very keenly last week as I looked at the eggplant I received in my CSA basket. I’d already made eggplant parmigiana and badly wanted to do something neat with this second specimen. Then I remembered the sauce and the pickled eggplant. I hadn’t had it in years — apparently there weren’t enough women like my mom to keep Pasta & More afloat — but the memory was alive and, suddenly, all I wanted in the world was to recreate it.

I hopped online and found a recipe for Nonna’s spicy pickled eggplant by someone who had put it on their blog. I got to work, and half an hour later I was filling a jar with olive oil, red pepper flakes, garlic cloves and eggplant cut into strips, which I’d blanched in a vinegar solution. Now was the hard part — a weeklong wait to let the eggplant, well, pickle.

Last night, the eggplant was ready. I’d been thinking about the recipe all week and was slightly nervous — I’m definitely a by-the-book, not a wing-it, kind of cook. But you can’t go very wrong with garlic and cream and pasta, so I took heart in the fact that it would be hard for it to be horrible. I added red pepper, minced garlic, a jar of artichoke hearts and tomatoes and watched the sauce combine. Soon, a familiar aroma was seeping throughout the kitchen — the smell of those winter weeknights in the Kaprowy house.