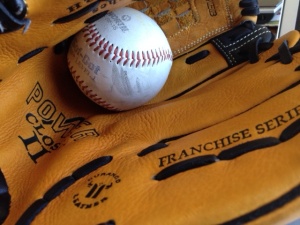 As I was going through my old photos the other day, I came upon one of myself playing catch with my dad and little brother Matthew. It was Father’s Day circa 1998, and I had decided we needed to do something special. So we packed some sandwiches, cold cans of Coca Cola and headed to St. Ambrose beach on Lake Winnipeg. The photo is of me standing knee-deep in the water, my face scrunched up with determination, ready to throw the ball to Matthew.

The photo looks good, but the three of us all knew where the ball was really going to end up: bobbing in the water after sailing either way to the left, way overhead or way short of my brother.

Because, dear readers, I throw like a girl. Really, really bad.

It is not, however, for lack of trying to improve. In fact, once spring even kind of hit in Headingley, Manitoba, Matthew and I were outside with our gloves playing catch. I loved my glove, how soft and worn it was, loved hearing the ball smack right in the pocket, yanking my wrist backward a little.

My mom would usually kick us out while she was cooking dinner — “OK, you kids, get. Go play. Go outside,” — so we’d get our mitts and the hard little baseball with bruises on its skin. And we’d play, somehow never cold, despite the fact that Matthew was often fishing the ball out of the bank of snow it had landed in.

When the snow would melt and the icy water had receded from the ditches, we’d go on the gravel road and throw to each other, tossing our signature Super High Pop Flies over the telephone wires, their height alone allowing Matthew the time to scramble underneath my wayward tosses so he could catch them.

Then baseball season would start and Matthew would shine like a star. I, my throwing handicap coupled with the fact that I couldn’t actually hit either, stayed on the bench and in the outfield.

These deficits, however, did not prevent my dad from remaining hopeful about my potential. In fact, one season I discovered that he had enrolled me on an all-boys team, hoping just being around good players would have a good effect on me. I’m not sure how he hoped this would be accomplished. Through simply wanting to impress the boys? Through osmosis? Perhaps rub off on me like lice?

Needless to say, it was a long season and quite a few times l listened to the boys discussing strategy while reviewing the batting lineup: “OK, Tara is up next. She’s going to strike out, but Scottie is up after her. We’ve still got a chance.”

Despite the fact that I was and am a quite terrible baseball player, for some reason it has never stopped me from playing. In fact, for the year that I worked at the Canadian Embassy in Washington, I joined their team, The La Bats. Though my skills didn’t improve, I had a great time, in part because during the game we actually drank Labatts beer we got from the commissary.

At any rate, last Tuesday I decided it was a lovely afternoon for my stepdaughter Gabrielle and I to head outside for a little catch. Gabrielle, unlike me, is very gifted at throwing and can pack that ball into your mitt with a satisfying punch. She is not, however, very good at catching, so you can imagine with my throwing and her catching impairments, it was pretty slow going.

But suddenly, a little magic happened. Gabrielle decided she was going to teach me how to throw.

“Enough of this. You’re finally going to get this right, Kaprowy,” she announced. “Get into your athletic stance.”

Given the fact that she is now 13, I’ll take any communication I can get that doesn’t involve yelling louder than her stereo. But a lesson? I was in there like a dirty shirt.

Quickly, I realized that Gabrielle actually not only has natural skill at throwing, but a natural skill at teaching. She quickly assessed my throw — which usually results in the ball feebly pitching down in the grass no matter how much I try to boost it up.

“You’re releasing at the wrong time,” she determined, by now in full-bore teaching mode. “You need to snap your elbow, then snap your wrist. Snap-snap, snap-snap.”

I tried and the ball wheezily lobbed and fell limply to the right.

“Imagine you’re doing the front crawl,” she said, her voice getting louder. “Right at the moment you’re going to rotate your arm down into the water, that’s when you let go of the ball. Snap-snap.”

Suddenly, I knew what she meant. I picked up the ball, organized my fingers around the laces and threw — snap-snap — perfectly.

It didn’t happen again, but it was a start, and as we stood in the yard with the willow tree waving and dogwood floating, I’d like to think my dad was watching.