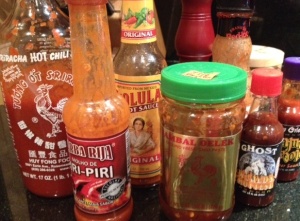 A few weeks ago, I found myself moving a super-industrial drier to gain access to the spice drawer. The drier was one of many that were in place throughout the kitchen and basement after a pipe burst in our upstairs bathroom and water poured down through the ceilings. In fact, so stuffed was the kitchen with drying equipment that it was essentially unusable, so unusable the insurance company was actually paying for us to go out to restaurants to eat.

After three days of doing that, though, I was ready for home-cooked food. Luckily, my mother-in-law stepped in and brought over a pan of her lasagna. Which brings me to the spice drawer, wherein live the hot pepper flakes.

See, in the past few years, I have become one of those spicy people. You know the kind you see at Waffle House and they ask for Tabasco so they can coat their eggs with it? Or the kind you see at Kroger stocking up on Serrano peppers, prompting you to think to yourself, ‘Oh, so that’s who buys the serranos.’”

But it was only while throwing all my strength into moving the industrial drier, risking scratches on the floor, chancing that the equipment might break, daring my back to go out, that I realized just how much I’ve become dedicated to spice. Because I wanted those hot pepper flakes. I wanted them bad.

It wasn’t always this way. Instead, I was a kid with a milquetoast palate. Black pepper was out of the question. If pressed, I could handle Old El Paso taco seasoning mix, but I wasn’t thrilled about it. Even regular Colgate or Crest was challenging for these tender taste buds. And when I turned 18, I carried those preferences with me, challenging them occasionally at Thai or Indian restaurants but keeping the heat as tamed as I could.

But about six years ago, I came upon this article in a food magazine that identified all of the chile peppers you would find in an average grocery store. The article, which I saved, didn’t just describe the appearance of about 20 of these peppers, it also described their flavor. In my world, spicy was spicy was spicy. But this article showed me that, like wine, there are also subtle flavor nuances — chocolate, fruit, smoke— in chile peppers. Finally, it also described the kind of heat you could expect from each of them. Some came on strong and then mellowed almost immediately. Some lingered. Some smoldered like coals and made your eyes water.

The article stuck with me and I decided right then and there I was tired of being left out of the Spicy Hot Club. So I started slowly by putting pickled jalapeno slices on my hamburgers. I started having more wasabi with my sushi. I started making increasingly hot salsa.

Then I started exploring hot sauce. I started with Tabasco and then tried Frank’s, which I realized I far preferred. Cholula is fun with tacos and fajitas. Sriracha was an immediate hit. Sambal olek I had to hunt down in an Asian food store in Lexington. Piri piri I found by chance while on vacation.

I knew when I was bringing home hot sauce in my suitcase that I had graduated to a new level. Now I’m eyeing those habaneros they sometimes have at the grocery and wondering if I have the guts.

The fun thing about being a spice queen is getting to discover a whole new world of food that you’ve spent your life carefully avoiding. It’s like finding a new aisle in the grocery store you never knew existed. And it really does jazz up stuff like eggs, pasta and burgers.

The danger is that you get addicted. The other day I found myself wondering aloud if it was wrong to put hot pepper flakes on prime rib and Yorkshire pudding (the withering look from my husband told me it was). The other danger is your addiction can affect the rest of the family. When my stepdaughter Gabrielle is with us for dinner, I keep it relatively bland — though she’s no shrinking violet; she can down a pepperoncini without batting an eye — but when she’s not, it’s game on. My husband William, however, is not quite as enthusiastic about heavy spice. In fact, he still occasionally brings up the aftermath of what he has dubbed Korean Week — I was exploring bulgogi and kimchee — which made him pretty sick.

Anyway, getting back to the spice drawer, luckily the floor didn’t get scratched and the industrial drier didn’t break as I leaned over and plucked out the hot pepper. But it did make me realize I’m a lot closer to trying those habaneros than I thought.