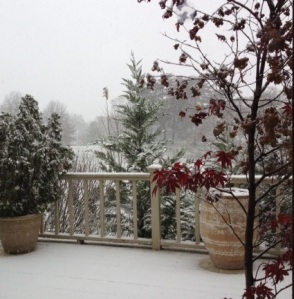 Snow is falling outside and, under an hour, everything has turned beautiful. There is nothing like the first snowfall of the year to make you re-appreciate your landscape and as I look out of the dining room window, I realize this is a moment I won’t forget.

It’s rare that you have those times, when you realize that something permanent is being embedded in your brain and that, in the coming years, you’ll refer to it often to squeeze a bit of its sweetness out. I feel lucky, so very, very lucky, this is one of these times.

Because this sweet snow is the cherry on top of the sundae: The results are in and my husband William is better. All, it turns out, better. The test results we received yesterday show his heart has fully recovered from the virus that attacked it last January. His ejection fraction has jumped up to a wonderful, normal 60 to 65 percent, where it is expected to stay.

These results are the latest batch in a series of tests that have taken place over the past nine and a half months. Each test has shown William’s heart improving after it was so devastated by the virus. This test was a critical one, though, as it would decide if he had recovered or if his heart function had stayed — and would be likely to remain — at a “low normal” capacity.

We got the results yesterday evening at 6:15. William went in for his test at 7:30 that morning with the understanding that the cardiologist would call him some time later in the day with the results. So William went to work, plowing away at reading CTs, MRIs and all other kinds of x-rays.

As the minutes ticked by, not one of them passing without me noticing it, I wondered how he was possibly functioning. By 9:20, staring at a blank screen that increasingly looked like a void, I’d given up writing for the day and started instead to let superstition take over: If I made the bed really carefully and tucked the corners in just right, William would be OK. If I paid the accountant bill and put it in the mailbox before the mailman got here, everything was going to be fine. If William had enough of his pills left to fill every slot in his weekly pillbox, then it was a sign we were in the clear. He was one pill short, so what did that mean? Did the one he took that morning count? Did that instead make the perfect amount?

It’s a good thing this obsessive-compulsive behavior doesn’t take over very often. By noon, I was so exhausted looking for signs I just mindlessly resigned myself to watching TV. Every few minutes, the enormity of the results would slam into me though, making me wince and shudder.

“Please,” I would periodically say aloud to no one in particular. “Just please.”

Overly dramatic? Yes, I suppose so. How lucky were we that William’s heart had already improved as much as it had? How many more serious illnesses were people dealing with? How many more dire diagnoses?

But I wasn’t in the mood to count my blessings like ducks in a row to somehow smooth over the rough edges. I wanted it over. I wanted good news. I thought of him sitting in his office working, so strong and yet waiting helplessly for that phone call that would either release him or devastate him. I wanted him to be free, shed all this sick business like a cloak.

By 6 p.m., I was as close to desperate as I’ve ever been. I was convinced the cardiologist had gotten too busy and forgotten about William so was preparing myself to have to wait another 14 hours. I was driving Gabrielle to school so she could perform at the basketball game for her dance team. We’d just pulled into the parking lot, just pulled in, when William texted.

And now the snow. It’s stopped now and everything is white and still. In a few minutes, I’m going to go outside for a walk. So I can listen to the quiet and look at this new landscape we have in front of us.