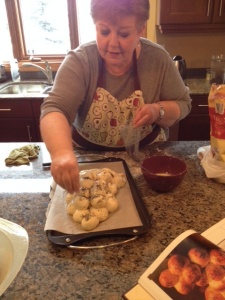 Up until I realized it was probably responsible for making me gain 10 pounds, I spent a batch of time each week baking bread. This experiment went on for nearly a year, with each Monday morning spent watching the KitchenAid spin while I slowly added flour to the yeast, water, sugar, salt and oil in the bowl. It was a pleasurable process, and I always felt like a real, live Suzy Homemaker when I turned the golden loaves on the baking racks I’d set up. I especially looked forward to the moment when I could offer a still-warm slice to my stepdaughter Gabrielle after I picked her up from school.

My interest in baking bread started with a Williams-Sonoma cookbook my husband bought before I moved to Kentucky. The pictures looked delicious, and I started working my way through the recipes. The results were mediocre though, with none of them tasting especially memorable no matter how many raisins, olives, sun-dried tomatoes, herbs and caraway I added. Certainly they tasted nothing like the bread I grew up with on the prairies, where flour comes from hard winter wheat that produces loaves with a tasty, soft crumb and a crunchy, equally tasty crust.

Then my resourceful mom stepped in and hooked me up with her friend Carol, a 62-year-old woman who took over her mother’s kitchen at age 9 and has been cooking and baking ever since. I had met Carol a few times before and noticed she always came with shortbread wrapped in a beautifully ribboned box.

My mom asked her if she would bake with me for an afternoon while I was visiting, and Carol immediately agreed. She showed up on a snowy day with a cardboard banker’s box topped full with baking essentials. Anchoring the box was a Braun mixer, which she deftly set up, and a 10-pound bag of Robin Hood flour.

Tying an apron around her waist, Carol immediately got to work, her chirpy instructions mixed in with wonderfully amusing stories about her childhood in a small town in Saskatchewan. Those largely revolved around her mom, a slim, attractive woman who hated to cook and hated a dirty kitchen even more. So Carol turned to her British grandmother, who taught her to bake English staples like steak and kidney pie until she moved to California.

Carol was then left to her own devices, and soon her interest turned to baking. As she added flour to her mighty mixer, Carol talked about her many failures, the most amusing of which was the time she thought her yeast had failed and she dumped her project in the garbage can. It was of course her mother who discovered an hour later that the warmth of the garbage scraps had activated the yeast and the dough swelled so heartily it pushed the scraps right onto the floor.

As she talked, I noticed that a most lovely dough was forming in the mixer and when she turned it out onto the counter top, she had me put my hands on it. It was warm, elastic, heavy as a baby, perfect.

“Now you knead it just a little — I think of it as giving it CPR,” she said confidentially, folding a piece of dough over and firmly sinking her knuckles and palms into it.

I watched, taking copious amounts of notes and mentally preparing myself for the occasion when I would be doing this on my own at home. Which, a week later, I had a chance to do and baked three pretty good loaves of bread courtesy of Carol’s recipe, the secret to which is oatmeal.

Anyway, two days ago while I was spending a few days in Winnipeg, Carol arrived with her banker’s box again. This time our project was a table centerpiece that looked like a bunch of grapes, with each grape actually a little bun covered in poppy seeds. Once again, Carol shared her wealth of knowledge, and I ate it up nearly as happily as I ate the grape-buns we eventually baked. It was while I was watching her expertly disengage the dough from her mixer whisk that I realized the true happiness that comes from baking bread.

For me, it’s not like any other cooking, in part because you are forced to take your time. You cannot hurry the addition of flour, you have to knead the dough until it turns elastic, you have to wait for the yeast to do its job, you have to bake it until the loaf makes a hollow sound when you knock it, and you have to cool it properly before you slice it. It requires patience, but a good loaf of bread, for all its few ingredients, also requires a true mastery of skill — one I’ve been lucky enough to witness.

So, until Christmas, I vow to resume my experiment of weekly batches of bread and, hopefully, get ever closer to recreating a little bit of the prairies among the Kentucky hills.