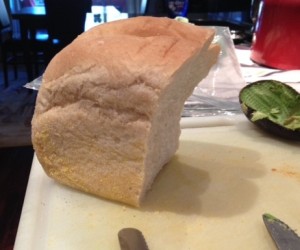 There are many differences between men and women, but according to my stepdad Peter, one of the most reliable of them has to do with how we slice bread. He pointed this out to me while we were in my kitchen a few months back and I stood with a loaf of bread before me that was decidedly lopsided.

“I take it you have something to do with that?” he asked in his mild Australian accent.

I turned with the smile I only reserve for Peter because I just love him so much.

“Maybe as in indeed?”

“Mayhaps as in yes?”

I bowed my head in mock shame.

“Mayhaps as in yes.”

I don’t know what it is, but for some reason I cannot slice a loaf of bread straight. I start out with the best intentions, positioning the knife at a right angle to the top of the loaf. I start slicing, back, forth, back, forth and then halfway through it all turns to pot: something happens and the knife starts angling inward. The result is a slice of bread that looks like a ramp and a loaf that, as Peter pointed out, looks like a doorstop.

Apparently, I come by this honestly. According to Peter, women the world over have this trouble and, boy, my husband is happy enough to back him on this. Peter has gone so far as to take the knife out of my mom’s hand, so fearful was he in watching her cut a bagel in half. And I’ll, in turn, back my mom on that point: Bagels are tricky when it comes to getting those halves symmetrical. Always, mine are uneven so one half is too big for the toaster slot and it touches the red coils and gets black on the edges. Then the other side is too thin so it gets overly toasted and hard so when I bite into it it scrapes the roof of my mouth.

I suppose, if we were really to drill down, Peter would argue that women aren’t as handy with knives as men are. Why that would be I’m not sure, as my little brother Matthew and I both spent a good amount of time whittling sticks around the campfire when we were kids. Matthew actually got obsessed with pocketknives and accrued quite a collection, including what he called a Rambo knife whose handle boasted a compass at the bottom that could be screwed off to reveal a cache of waterproof matches.

Since I only ever remember being fascinated that the knife actually had a little house inside it that, possibly, one of my peanut dolls could live in, maybe he did get more actual knife-slicing instruction than I did.

I do know one thing: I don’t ever learn my lesson with knives. I have two scars on my left palm that attest to this, both of which came from the identical attempt to try to get the seed out of the avocado. About 15 years ago, I saw my friend Stefan pierce the seed with a knife, setting the blade deep enough so that he simply turned the knife and the seed popped out. I was so impressed, I tried to do the same while hosting my very first dinner party, stomping the blade down and then having it slide straight off the slippery seed and straight into my palm. I’m not going to lie: for that one I actually turned my hand over to see if the knife had gone straight through. Luckily, it didn’t but I did get a stern talking-to courtesy of my lovely husband.

And yet, eight years later, there I was again, this time thankfully alone in the kitchen with a fresh avocado in my hand. So what did I do? The same exact move with the same exact result.

It was while skiing with my parents this winter that I considered Peter may be on to something. We had slept in later than my parents, and when we awoke breakfast was in full swing. As we sleepily stepped into the kitchen, I noticed my mom holding a paper towel to her hand, which William immediately stopped to inspect.

“Cut myself,” she said, shrugging it off.

Peter looked at me and I slinked off.

I guess the weakest part of Peter’s assertion is he has decided women everywhere are bad at cutting bread and not just my mom and I. I know he’s traveled a lot, but he couldn’t possibly have seen every woman mangle a loaf to prove this claim. So I’m going to conduct a little experiment tonight and have my stepdaughter Gabrielle, who shares no genetic material with me, go at it and see how it goes. I’m hoping for a straight edge — for women everywhere.