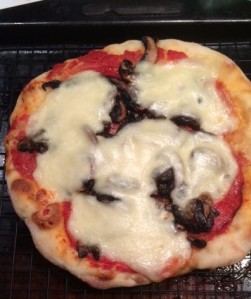 For the past year or so, I’ve been hosting two of my husband’s best friends on a very regular basis for dinner. They’ve both recently become bachelors and are always hungry for a meal, so about once or twice a month I invite them over to get fed. Usually, they come on a Wednesday. One almost always brings me roses he picks up at Kroger on his way from work. The other brings a pack of raw salmon or a pheasant he shot that weekend. And the other day, as my husband shook martinis and they took their regular seats at the kitchen island, I realized it’s become one of my favorite things to do.

It’s rare to be the only woman at a table of men and, at first, I felt a little uncomfortable, suspecting maybe I should go into the other room so they could talk about cars and fishing — or something. But as they sipped and I cooked, they seemed comfortable enough with my presence and now I’m used to being part of the mix.

I’ve learned having men over, as opposed to women, is incredibly interesting.

One, and I’ve struggled with how to phrase this so I’m going to say it as directly as I can: Your expectations are lower. That sounds condescending and it is condescending, though I don’t mean it to be necessarily. But, honestly, when male guests help clear a table or step in to stir a sauce or run downstairs double-time to get an ingredient I need, there is a part of me — a shockingly traditional part of me — that’s a little, well, surprised.

I realized this most clearly one day when they both showed up with the Tupperware and other dishes I sent home with them for leftovers. When it comes to women, you expect to get your stuff back. In fact, if you don’t get it back often enough, especially the Glass Lock stuff, it’s license for friendship dismissal.

But when a man comes into your house balancing Tupperware he’s, a), remembered to bring, and, b), cleaned himself, there is something somewhat charming and unanticipated about it.

Two, the nature of the conversation is different. For example, we talk about NPR, like, a lot. In fact, there have been several times one of the guys has brought up an article on, say, stem cells or honeybees or Chechnya and the three of us chime in, “Oh yeah, I heard that one on NPR too.” Whereas women often home in on catching you up on what’s happened since you’ve last talked, the guys are happy enough to talk about world events or fitness or subjects that have nothing to do with people we know in common.

Now, that being said, let’s be clear: They are not above gossip. They all work at the hospital here and, boy, are they ready to delve into some of the juiciest bits. But interestingly, that usually comes later in the party, usually by the third course or, fittingly, with dessert. I’d wager that women would never think to or want to wait that long.

I’ve also found there is less clarification needed with men. I had always been suspect of the claim that men just don’t think about things as much as women, but I’ve come to believe it. With men, if you apologize about something you said the night before that maybe you shouldn’t have said, they don’t even know what you’re talking about. But how many times have I woken up in the middle of the night in a cold sweat worried I said something inelegantly to Suzy? Or in a way that could be misconstrued to Claire? Countless times. Then when you do apologize to Suzy and Claire they know what you’re referencing precisely, and there are a few long minutes before you decide if the apology is truly accepted — or if they’re annoyed but just being polite.

And, finally, men clean their plates. You spend an afternoon cooking and you know not one crumb is going in the garbage. That’s satisfying in no small part because it’s actually quite a lot of work to cook. Having a guest who comes to a dinner party to pick at their food because they don’t want to gain weight perhaps shouldn’t have come at all. Moreover, these guys in particular appreciate every bite. They are big foodies and I can throw anything at them — beef tongue, caviar, sweetbreads, quail. They’ll happily dig in.

Of course, my girlfriends right and guide me in an invaluable way, and I love to have them over too. There is just a different set of expectations, which I didn’t realize were in place until I experienced the contrast.

Which I will experience again tonight. Homemade pizza, Caesar salad, chocolate chip cookies and beer are on the menu for the guys. My husband’s had a tough few weeks and I’m looking forward to seeing him cracking jokes with his friends. In preparation, I’ve studied up on the week’s headlines. I’ve double-checked we have plenty of vermouth. And the pizza stone is in the oven. Now, boys, let’s eat.