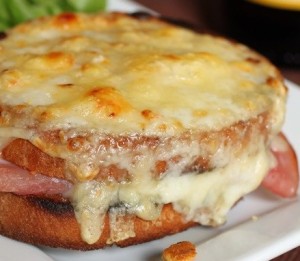 It was a croque-monsieur that finally yanked me out of my bad mood last week.

It was a cold, snowless night and we were at a friend’s house for dinner. All four of us chatted comfortably around the kitchen island for a while, and I was reminded of the joy of small gatherings as opposed to the giant blow-outs we hosted over the holidays.

Then the woman, whose name is Hannah, started making a béchamel sauce, and layered fresh ham on slices of toasted brioche. Once the milky sauce had thickened, she poured it on the ham, topped it with another piece of bread and sprinkled grated gruyère cheese over everything. Then she popped it in a hot oven to let things get bubbly and golden.

As I cut into my beautiful French sandwich, which was paired with a simple salad, I felt renewed. The kitchen. The kitchen is what I needed to inject myself with the inspiration of a new year.

After that night, I’ve spent a lot of time scouring my cookbooks and flagging recipes I want to try. Then I go to the grocery and stock up for four meals at a time so I don’t have to get out even once more than I need to. It’s reminded me how much I love my cookbooks and how neglected they’ve become in favor of quick recipes online or old standards I have memorized.

The theme of the meals, of course, is healthy. If I really want to be committed to the New Year, I have to get the bulk of 2014 off of me. It’s forced me to consider recipes I would normally overlook. As a result, I’ve put tahini in mashed butternut squash. I made a curry with eggplant and potatoes that was a big hit with Gabrielle. On Saturday, I worked 12 hours on a Vietnamese noodle soup. Tonight is braised chicken with artichokes. Tomorrow is beet soup with caraway.

Not all of it has been a hit. In fact, most of the recipes I’ve tried so far I won’t make again. The Vietnamese soup especially was a huge disappointment. But I’ve decided not to let myself worry about that. So often with cooking, it can be just about getting it over with so you can finally sit down and relax. Then, if the meal isn’t even great, you feel cheated, angrily think, “Well, that was a waste of time.” But the fun of cooking is not only about the end result, I have remembered. It’s about getting to it too.

Besides, even if it’s the most well-behaved tofu on the menu, the kitchen itself is so warm and cozy. I listen to “All Things Considered” on NPR, sauces or soups bubble in a pot, and it’s just me, William and Gabrielle to set the table for. That’s another nice thing about cooking in January. It’s just family. Of course, it’s fun to have friends over, but you can get cooked out over the holidays. These cold nights, it’s just us talking about our small days over glasses of milk.

And, over the past week, my waistline has fallen in line. It’s not all about a number, but it is about feeling good in your clothes and that’s a nice thing. Another week or two of this, and I should be back to normal. Then I’ll be more free to dive into meatball recipes, buttery pasta, homemade bread, rib eye steaks, hamburgers and homemade onion rings. I, of course, can’t wait.

But that’s another thing that feels different this year. Every February, I hit the cooking doldrums, an endless sea bobbing only with tedious cauliflower and vapid carrots. Maybe spiritless spinach floats by like algae. Seaweed starts to look appealing. But this year, I resolve to not let that happen. There are too many recipes to try for that. I, gulp, have too many cookbooks to ever have that excuse.

So I will cook this winter. I will cook with intent and with joy. And at the end of it, I’ll celebrate with another bite of croque-monsieur.

P.S. If you’re looking for a croque-monsieur recipe now, Ina Garten has a great one online on the Food Network site.