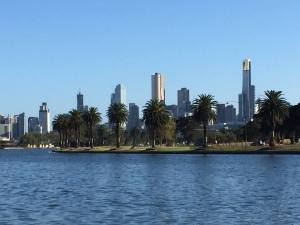 I’m almost, but not quite, finished writing about the trip to Australia we took a few weeks ago. It really was a momentous vacation for our family, so, at the risk of being the neighbor that makes you watch his extensive slideshow of his trip to Gettysburg, I’d like to talk about it just a little more.

We spent the bulk of our trip in Melbourne, where my stepdad Peter is from. Immediately upon leaving the airport, the city felt familiar, extremely Western and clean, with an incredible skyline. We saw billboards advertising movies that were recently in theatres here (Furious 7, anyone?), everyone had iPhones, there were Kentucky Fried Chickens everywhere, and people were fit and well dressed. Of course, it was fall  and the leaves were changing, which was a bit of an adjustment, but otherwise, it was like we were in a flatter version of San Francisco or a hillier Chicago.

Of course, it doesn’t take long before the uniqueness of the country becomes apparent. It just takes speaking to a native Melbournian before you realize you’re not in Kansas anymore: “How you going?” they’ll ask you.

Oh, is there anything more lovely than the Australian accent? I had a roommate in a hostel once who was from Sydney and I could have listened to her all day, which I did. Of course, what she actually said I’m not entirely sure as, of all the British colonials, Australians have had the most fun sprucing up the language.

Over the next two weeks, we were told to “rug up” (dress warmly), avoid wearing “budgie smugglers” (Speedos) on the beach, and keep an eye out for Mr. Plod (the police). We ate snags (sausage), chook (chicken), sangers (sandwiches), drank stickies (liqueur) and flat whites (coffee) but at all costs avoided Macca’s (McDonald’s). When we finished eating a meal, our Australian guests declared they were full “up to pussy’s bow” or up to “Molly’s beads.” In speaking about an unconventional rellie (relative), we learned he was considered to be “away with the fairies.” And always, always, we felt Australians lived life to the fullest, packing in the most they could “before they fell off the perch.”

Of all the idioms, Mr. Plod figured the most prominently. As in Canada, everything is far away in Australia because of its sparse population (23 million over 7.74 million square kilometers compared to 316 million over 9.83 million sq km in the U.S.). As such, we spent a lot of time on the road, where Mr. Plod lives.

And Mr. Plod? He doesn’t mess around. On the highway, the speed limit is usually 100 kilometers an hour. That means the fastest you can go is, yep, 100 kilometers an hour. There is no wiggle room of about 10 km like there is in Canada or the U.S. The rule is the rule, you follow it or Mr. Plod comes and finds you. People take it so seriously there are places where you can test your speedometer to see if it’s calibrated correctly. And when the speed drops from 100 to 80, you brake and drop down too, no casual progression.

The rules against drinking and driving are likewise strict and so people walk, take the tram, have a DD or take a portable breathalyzer machine to restaurants to make sure they aren’t over the limit.

This strict adherence to rules was surprising to me; I always thought of Australians as incredibly laid back and gregarious. And they are. But there is definitely an underlying British influence that is present. I was conscious of my table manners there in a way I am not at home. I chose my words more carefully so, like, I didn’t sound like a dummy.

Of course, Australians are far too well mannered and upbeat to ever let you feel that way. At every turn, we were treated with extreme kindness, from the moment we stepped off the plane and told our customs agent we couldn’t check our bags because they were lost.

That was a lesson in perspective. I also learned lessons in hospitality when we visited Peter’s friends and family. Quite simply, they couldn’t do enough for us, from having us over for beautiful meals and taking us shopping, to driving us to a wildlife sanctuary, giving us tram tickets, showing us their art museums, bringing us raincoats and umbrellas, making restaurant reservations, letting us drive their cars (on the left) and advising us on directions and sightseeing. All of that, to a native, can be tedious stuff, but they took it on and made it look effortless.

In the end, it was a remarkable trip. We learned a lot, ate a lot, walked a lot, talked a lot and saw a lot. So thanks for making your way through this textual version of a slide show. G’day. (And yes, they really say that.)

2 thoughts on “Visiting the great Down Under”