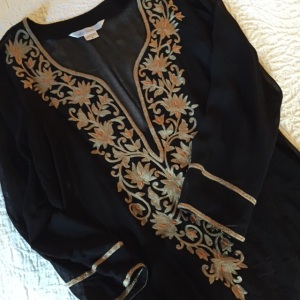 A little more than a year ago, I wrote a column discussing how much I hate wearing a bathing suit. But, as I face another summer, I’ve come to realize that conversation was incomplete. Because it didn’t even touch on the complexity of bathing suit season.

The threat of the season starts kicking in sometime in the middle of April. Around the middle of May, it’s in full swing and by the first of June, if you still haven’t acknowledged it, you’re in trouble. That’s because the upcoming season results in all living, first-world women to what? That’s right, ladies: get skinny.

The most interesting thing about this phenomenon is I don’t actually have a particular suit to get ready for. That’s because I hate all of my bathing suits from previous years, which did nothing to make me look more like Jennifer Lopez. That means that the holy grail of suits is still out there and it’s for that magical, invisible suit that I am preparing.

What does this preparation entail? Well, not eating, that’s one. In fact, that’s worthy of examination in and of itself. This year, my plan of attack is just to simply lose weight. And for me, losing weight, getting down to that nice flattish-stomach phase, also means not working out or training for a goal, which makes me so hungry I can’t resist temptation from the fridge or the cupboard or Wendy’s. So this summer, I’ve vowed to limit my exercise to a few minutes on the elliptical and a yoga class or two. So essentially, to prepare for bathing suit season, I’m becoming less fit.

It also means looking for that new suit. This year, unable to once again face the Macy’s change room, I decided to search for a suit online. This, I will say, was a comfortable process. The website was nice enough to tell me that all bathing suits fit small so to go a size up. Having a website tell you that instead of trying on suits and despairing you are no longer the size you thought you were lets a whole lot of steam out of the bathing suit boiler room.

Buying online also allowed me to tailor my search according to a) color, b) size, c) kind of suit. Earlier this year, I came to the conclusion that I haven’t found The Suit because I’ve been looking in the bikini section. Who, after all, did I think I was? Even at 22 I couldn’t find the right one. Did I really think at 38 I was going to get any luckier? So I clicked on one-pieces and an array of suits that looked like they belonged on moms in the Sears catalog popped up. I ask you this: What in the world has happened to one-pieces lately? Back in the 80s, my mom wore silky one-pieces that were low in the chest, cut so high on the thighs you could practically see her hip bone, and made her look exactly like Jane Fonda.

But no longer. As far as I can tell, every one-piece for sale has been designed with Laura Bush in mind.

No matter, I pressed on, finally settling on three: one with complicated straps that might distract from the fact that it otherwise would blend in at a Republican convention, a one-shoulder pink one, and, let’s face it, a red bikini because I couldn’t quite give up the dream entirely.

I’m still waiting for them to arrive and, boy, am I excited. Not once, not twice, but three times I went to the window yesterday when I heard a big truck go by, hoping that it was the UPS man. So far, no dice, the suits are still out there and hope is still alive.

Of course, once they arrive and should they work out, the question remains: Where will I wear them? And that is the final comment I have to make on bathing suit season. Where are we actually going to go with these gems on? I have no boat, I have no plans for the beach and, while there is a local pool, I don’t go to it. Essentially, I am buying this suit in case. In case someone decides to throw a pool party. In case I am invited to go boating. In case I accidentally go to Florida. And when does that ever happen? The morning after you ate three corn dogs, a bucket of popcorn and a giant box of Junior Mints because you went to the drive-in and you were finally feeling free.

So bathing suit season boils down to this: a whole lot of anxiety, hunger, and hemming and hawing all for the possibility of two to three outings during which you what? Wear your cover-up.