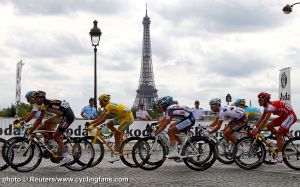 It’s that time of year again, the time when Phil Liggett becomes the narrator in our dreams, when soaring views of castles, mountains and rivers become commonplace, when “the cobbles” and “traffic furniture” are the subject of whole conversations. Yes, it’s time for the Tour de France and I plan on eating up as many minutes as I can.

We don’t have a large amount of traditions in this house and certainly none revolving around sports, but watching the Tour is one of them. Every year, my husband and I haul out the TV trays in the basement and get the channel settled on NBCSN.

I love watching for so many reasons, not the least of which is the breathtaking camera work. The Tour coverage takes a lot of time looking at the countryside in which the ride takes place and, oh, what a sight. Every town, it seems, has a phenomenal church. Every field is manicured. Every forest and mountain is magical. And since the riders ride more than 3,300 kilometers — think of that — over three weeks, you see a lot. The camera work is so good it actually feels like a vacation — or at least like you’re planning for one.

I also love the teamwork that is so intrinsic to the sport. Each team has riders with a variety of strengths. Some are sprinters, some are climbers, some are time trialists. Every team also has a domestique, whose job is to act as the helper by going to the back of the peloton and bringing water bottles and food to the front of the pack.

Then each team has a G.C. rider. This means “general classification” and it’s this guy who has the best chance of winning the entire Tour. This doesn’t mean he will necessarily win a lot or any of the stages, but he’s expected to finish well overall, hopefully with the fastest time. Usually, these guys are incredible climbers, but they basically have to be good at everything.

The role of the rest of the guys on the team is to protect the G.C. rider, whether than means riding in front to allow him to draft behind them or just protect him from crashes. If he does get waylaid by a crash, the members of his team are expected to go back and help him get ahead again.

Seeing all of this work together really is a thing of beauty. I mean you have to figure that every rider would like to be the G.C., but the fact that they sacrifice their own ambition for the team is so touching to me. I mean, sometimes you have a rider (Richie Porte) mash it out for kilometers at a time up a mountain just so at the very end he can let the G.C. (Chris Froome) pass him and take the stage.

Anyway, so you’ve got the beauty and you’ve got the teamwork. But there is also the commentators. Other than Don Cherry, I have never had actual affection for the people telling me what is going on, but for the Tour I do. There is Bobbing Bob Roll, who always looks like he just ate a canary. There is Christian Vande Velde this year, an American rider who recently retired and has good insight to share. And then of course you have Paul Sherwen and Phil Liggett, two Brits who’ve been covering this for decades. It’s usually Phil who comes up with gems like “this rider is wearing a mask of pain” or “this guy is gone like a turkey in the corn.”

My husband absolutely loves Phil. In fact, when he’s riding his own bicycle, he imagines Phil is announcing just for him, spurring him on to get to the top of the next hill or finish really strong. I’ve ridden with him a few times, and I’m here to say, silly or not, it works and I suspect he’s not the only one out there using Phil for motivation.

The nice thing too is these announcers are former cyclists and continue to be in tiptop shape, all of which is inspiring. In fact, our meals tend to get ridiculously healthy during Tour time, filled with summer veggies and lean protein. I’ve been known to do sit-ups during the commercials. And this year, we’ve been working out every night before we start watching.

This year, I’m rooting for Nairo Quintana, a 25-year-old Columbian. If he wins, he’ll be the first South American to do so and he has the backing of his entire country behind him. I’ve seen him climb hills and it’s bloody incredible to watch. The sheer will just streams off of him. Failing that, I’ll take Chris Froome, who seems like such a nice guy. But Alberto Contador, the fiery Spaniard, no thanks. Too rude.

One thought on “Vive le Tour!”