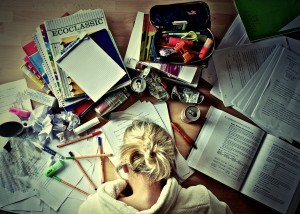 For the past few weeks, we’ve been sending Gabrielle upstairs to her room to study. I can’t say it’s earned us any points in the parenting popularity contest, but Gabrielle has finally had to hit the books if she wants to keep her 4.0.

Seeing her lumber up the stairs though, hearing her sigh, seeing her struggle to develop her own studying strategy, boy, has it brought things back. Because there is no greater mental torture than exam season, is there? For me and my slow brain, it was four weeks of intense study every spring from grade nine on, hours each night with just me and my binders of notes.

As I remember it, exam season broke down into four mental states, each wildly different from each other. See if you agree.

This mental state provides the black cloud of doom that is at the heart of exam season. No matter how high you fly or how deep you dig into sand, there is no real way to avoid its bowel-loosening, pall-developing, palsy-prompting turbulence.

Because it’s always there: that crystal clear image where you face your exam paper and know not three, not two, not one, but none of the answers. Flip, flip, flip go the pages, blank, blank, blank is your mind.

How does that feel? Like riding down a really high elevator, like the ones they have at the Empire State building, much too fast. How does it smell? Like burnt toast. How does it taste? Like you’re sucking on a bowlful of nickels.

In short, it’s a terrible state, one I tried hard to get in front of by studying my brains out. But, while I guess fear of failure worked as my No. 1 motivator, it’s also probably why I absolutely hated school so, yeah, I don’t recommend my approach.

Ironic, of course, that this state lies so intimately next to the fear of failure, but during exam season they make particularly lively bedfellows. You know you should be studying, which would lessen the fear, but it feels just so damn nice to do just about anything else in the world. Painting your nails. Cleaning your glasses. Very exactly cutting your pancakes. Watching “Roseanne.” Killing weeds for your dad wearing a hard plastic backpack filled with chemicals that slosh around and sometimes get on your legs, which makes your skin burn.

If there were a pill you could take that would remind you how nice doing those things feels when you don’t have studying looming over your head, we’d all take a lot less for granted in life. But alas, it’s only during exam season that everything else feels so terribly, terribly engaging.

DREAMING OF YOUR POST-EXAM LIFE

Oh but my life was going to be amazing after school let out. Filled with boyfriends. Parties. Trips to the beach. Waterskiing on the lake. Hot fudge sundaes. Sunbathing on the deck. Playing badminton until it got dark out. Bike riding around the neighborhood sucking on popsicles. With my elbow on my notes, my chin in my palm and my eyes staring out the window, the daydreams were vivid and wildly fulfilling.

Of course, the summer was mostly filled with mind-numbing babysitting gigs, day-time TV, two more carcinogenic applications of weed killer because dad wanted to teach me a lesson in stick-to-itiveness. But none of that was comprehensible while I was grinding through the stages of cell division.

This is the final kick in the teeth of exam season. Because when you’ve finally filled in your last bubble, written your last word, what do you feel? Well, not much really. If there were ever the anti-climax of all anti-climaxes, this is it. If anything, you just feel a little numb. You head home and have mashed potatoes for dinner and then you watch some 90210 and even Dylan doesn’t seem that interesting and the Peach Pit looks lame. You want to be riding down rainbows or at least eating a chocolate bar, but your dad isn’t going grocery shopping until Saturday. What’s more, your best friends Molly and Sarah have exams until Monday so they’re not even available to celebrate.

In the end, it’s all the definition of No Fun. And even 25 years later, I can so precisely remember the feeling of walking up those steps to face my books it makes me shudder. But as I told Gabrielle this morning, only five more days left. The poor kid lifted her grey face and nodded.