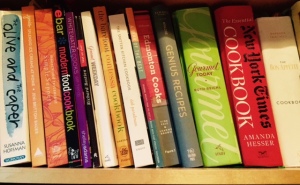 It’s that time of year where the kitchen has become a place of atonement. The holidays are over, every piece of clothing in your closet is tight (I had an infinity scarf feel too snug this week), and you can’t even use the excuse of East Orthodox Christmas anymore (celebrated Jan. 7, mmmmmm, 12 meatless dishes). Essentially, reality has set in hard. You have weight to lose, that’s one. You’re big into self-improvement, that’s two. And the fact that January has 31 days? Not. Nice.

This used to be my most hated time of year in the kitchen. By middle of January, I’d already eaten my fill of lentils, broccoli, frittatas and other foods that can feel like the nutritional equivalent of self-flagellation. Summer was a long way off so I couldn’t even look forward to a good tomato. I’d be looking around the place starving, searching for any excuse I could possibly find to reward myself with some cheese. By the end of the month, I’d usually lost two pounds, but my mood? It was sour. And February wasn’t looking much sweeter.

But last year, I decided to shed this attitude and turn to my cookbooks. Over the years, I’ve been gifted and have bought a lot of them, though through the summer, when I cook very simply, and through the holidays, when I rely on traditional stand-bys, they don’t get cracked open very often. But last year, I decided that they were the key to saving me from the culinary doldrums.

Obviously, my goal was to make meals that were low-cal and healthy and I did plenty of that, discovering great options like celery root soup (Barefoot Contessa) and mushroom and eggplant ragout (Moosewood Cookbook). But as the weeks passed, the goal evolved into simply trying new recipes so I could tell myself that I had covered more cookbook ground than I had the year before. Success or failure aside, it felt like progress.

The great thing about January and February is that you actually feel like cooking, in large part because it’s just not worth it not to. Getting rugged up, putting up with a cold drive, going to an expensive restaurant as the Christmas bills are rolling in, and then forcing yourself to just eat a salad (dressing on the side; shoot me) just doesn’t have much appeal, does it?

Instead, it’s much nicer to stay at home where it’s warm and cozy. And if that atmosphere can be accompanied by a killer meal, one that comes with compliments and self satisfaction, it’s a win-win.

So that’s what I did. And, honestly, it redefined this time of year for me. This year, I was actually looking forward to it.

But last night, I discovered another way to make this new tradition (yes, even January can have them) even sweeter. Last night, I cooked with my husband.

This, I’ll admit, hardly ever happens. I don’t consider myself an overly bossy person, but when it comes to the kitchen, you better watch yourself, mister. I like things one way and that one way is my way. I feel, to a degree, I’ve earned this right, as I’ve spent a lot of time reading recipes and food magazines and a lot of time over the stove.

This has long been an issue between my husband and I, as he, in every other way in his life, is used to being the boss. In addition, he is a scientist (which I am not) and so feels he has a level of expertise (i.e. molecular) I can’t relate to (he’s right). And, lest this lead to another set of parentheses, he loves to cook (and, in a way, thank God).

But yesterday, I decided, nope, I was not going to be difficult to get along with anymore. We were making chili, which seems easy enough except that I don’t take my chili lightly and so the recipe is excellent but very time-consuming. I took over finely chopping four onions, which I think everyone will agree is a crap job, and he took over cubing and trimming the chuck, brisket and short ribs.

And you know what, dear readers? It was absolutely lovely. An hour later, we were two-thirds of the way through the recipe (part of the work is you toast, then soak, then blend ancho and guajillo peppers and I promise you: If you do that, your life will change) and I didn’t want the work to end. We listened to the radio together, we commiserated over garlic skins that won’t skin, we consulted each other about how much broth to add. I finally realized that this was the cooking partner I’ve always had and yet always wanted. And the way I got it? Was by changing myself, not him.

So, as I toast you with a cup of tea though at any other time of the year it’s happy hour, here is to January and new traditions. Here is to harmony in the kitchen and harmony in life. I tell you what, this time of year isn’t half bad. In fact, like almost everything else, there’s quite a lot of beauty here.