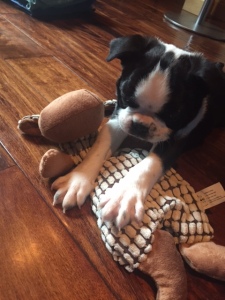 If someone sounded like they were performing verbal cartwheels in our subdivision at 4 a.m. last night, that was me. Dressed in a 20-year-old fleece and my cooking clogs, it wasn’t a pretty sight. But our new baby boy puppy Fitzgerald pooped and peed outside and I was willing to throw him a party.

In fact, I’m learning I’m willing to do just about anything for this dog. Right now, he is conked out on his bed, his chin settled on the fuzzy corner, and is moan-barking slightly in his dream. It is taking everything I am just to sit here and continue typing instead of going closer to stare at him. Everything he does, in my opinion, is so ridiculously cute that I don’t want to miss a second.

Last night, our routine game of Yahtzee was frequently halted because the three of us simply wanted to watch the dog. I mean, I didn’t even want to tally my points and I won the second game. But Fitzi was going ballistic with his Kong pacifier and then with his sock monkey squeaker toy and then decided to nose dive into every corner of his bed. By the end, he was so riled up he was on his back writhing and barking at himself.

At this writing, it’s been two days since we picked up our bundle of joy. Of course, the biggest obstacle is potty training. My husband William and my stepdaughter Gabrielle have both had dogs before, so they know the telltale stance of when a dog is about to, umm, void. Still, we were having a lot of misses in the pee department. So after each mishap, we’d scoop him outside to let him know where he should do his business. But that presented a new problem: How in the hell was he supposed to know what we were wanting him to do when he didn’t have to go anymore? I mean, picture it:

“Go potty,” the strangers say. “We know it’s cold out and you’re shivering and you actually already went potty, but work with us.”

“I don’t speak human. So that’s a),” Fitzi thinks. “And, b), you try peeing on command when it’s freezing outside, losers.”

Still, Fitzi is clearly a smart dog (possibly the smartest in the world?) and he figured out quickly that if he sat, William would give him a treat. So what did he do? The minute he was put outside, his little bum would go down. Then he’d look up at William with an expression that said, “Well? Give it to me. And then let me the hell back in the house.”

Turns out, Fitzi has a bit of a potty mouth. Yep. Just like his momma.

Anyway, last night at 4 a.m. we had considerably more success and this morning we did too. Now I just need him to swallow his deworming pill and today will basically be a full-on blow-out triumph. Gotta say though, not having a huge amount of luck in that department. The pill is shaped like a tiny bone (which is meant to be cute, but is just kind of dumb) and he’s pretty keen on putting it in his mouth and then, as you would a bone, dropping it on the floor.

It is now 24 hours later. The deworming pill finally went down without incident after I wrapped it in cheddar cheese.

Turns out, Fitzi loves cheese just like his momma.

Right now, Fitzi is on my lap licking one hand while I type with the other. It’s a little slow going, but totally worth it. He seems to be very calm and affectionate in the mornings. Yesterday, he would go between my feet as I made Gabrielle and William their lunches and try to sleep on them. Today, he just wants a little lap time. I love the occasional deep breaths puppies make, just like babies, the kind that both conveys “Oh me, I’m so exhausted” and “Ahhh, I’m so relaxed.”

OK, now Fitzi has discovered the computer and is trying to bite it, so I had better sign off.

It’s another day in puppy heaven.

Coming next week: trying a diet cleanse the same week you get a dog.