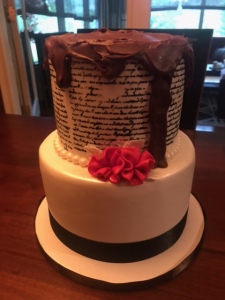 The cake stood in the center of the kitchen table. It had two tiers, separated by a band of candy pearls. The most dainty penmanship covered the top tier, written in icing with the finest tip, making it look like a cylindrical love letter. And in the shelf between the tiers, one red frosting rose.

Surrounding the cake were all of my friends who, when I opened the back door, shouted “Surprise!” I covered my mouth and started crying.

The cake itself stayed quiet.

Throughout the party that followed, I learned more of what had had to happen to pull off the birthday surprise. Clever planning. Lots of white lies. Maneuvering. Kristin flying in from Winnipeg the night before. My parents’ flight getting canceled so they arrived at the party just before I did. My poor husband flying around the house cleaning everything, surreptitiously texting, taking me to lunch in Louisville to get me out of the house.

But, as I pieced together what had happened over the past months, the story kept coming back to the cake.

Julie had repeatedly consulted with Sarah about what it should look like. My mom, who paid for it, was consulted too. Tulips were considered. Pinterest was pored over. Text messages flew between subdivisions and countries.

Finally, it was decided: a writer’s cake for a (failing) writer. They’d top it with a fountain pen. One tier would be chocolate, the other vanilla with raspberry buttercream. Cake Me Away’s Crissy Edwards would make it. It would be perfect.

And when Kristin and Julie picked it up the morning of the party, it was.

After the initial surprise, the party fell into its groove. Prosecco flowed. Shrimp boats were consumed. The smokers smoked outside and the men talked about cars. Get more wine from the basement fridge. Have a cucumber and cream cheese tea sandwich. They’re small so they don’t count.

Meanwhile, the cake waited and accepted all the compliments it received. How could the writing on it be so intricate? How had she done it?

The girls took pictures of each other in the living room. Sarah had brought a Polaroid camera and we posed with ecstatic faces. Surrounding us were clotheslines hanging from the bookshelves to the shutters, up the staircase, over doorways. Pinned on the clotheslines were pictures of me from over the years, painstakingly printed out by Sarah, hung by Meredith, who, along with Kristin, had been at my empty house working all afternoon to decorate.

Now there were more pictures, memories to add to the collection. The Polaroids showed we looked young and happy. I didn’t feel 40 except I was 40.

Music played on the speakers, songs ended, the party became louder, sillier. Becca, who’d come from North  Carolina, told me a story about a girl named Tara. Jessica spilled champagne on the kitchen floor and was lovely about it.

And then, all of a sudden, it was time to cut the cake. Julie was in charge and what a relief that was. She’d been instructed how to do it right and, boy, did she. The cake broke down into perfect blocks that Scott passed around.

I didn’t eat any. I was too overwhelmed to eat anything but a thousand cucumber and cream cheese tea sandwiches.

Around midnight, people started to go home. Sarah pulled off her signature French exit. DDs were ascertained. Fitzi the dog was tired after an evening of entertaining guests.

The next morning, the cake remained, wrapped carefully in plastic, probably by William. It was smaller now, cut into pieces, the orange and green straws that helped hold its layers together exposed.

I swiped my finger on the plate and tasted the icing. It was delicious. I pinched off more and realized this was all for me. And it was impossible, just impossible to know, how I had gotten so lucky.