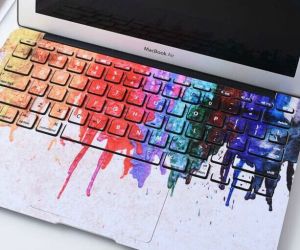 So there I was working on the community newsletter with my laptop in my lap. I was in Minneapolis airport waiting for my connection to Winnipeg, feeling pretty smug about the fact that I was in the Delta lounge, which had free wine, free snacks and free WIFI on offer.

My plan was to eat everything they had to give me, finish the newsletter, have a second glass of wine and dive nice and deep into the latest episode of “Ray Donovan.”

I had already had carrots, celery and hummus, and was thanking god I’d gotten them out of the way so I could move to the good stuff: chicken salad, crackers, cheese cubes, popcorn, Chex mix and cookies.

But first I’d have an intermezzo meal with chicken and wild rice soup.

So I went to get a small cup of it, quietly wondering how many times a person could go back to the buffet before other people would start to notice. In fact, I was still pondering this when I somehow dropped this same bowl of soup all over the keys of my laptop.

Since you weren’t likely sitting near me on that day, rest assured the next word out of my mouth started with the letter eff. That word was then coupled with a variety of others, including “me” and “off.” Then I tacked on “ing” and added “hell.”

I jumped out of my seat, picked up some napkins and started scooping the soup off the keys. Then I moistened another pile for a more thorough clean.

Now, my laptop and me, we’ve been through a lot, and I’m proud to say she’s one tough customer. I write on her all over the house. I cook with her. I eat lunch with her nearly every day. And along the way, she’s been spattered. She’s been too seldomly wiped down. She’s been bonked. A lot.

As I wiped off the sticky bits of rice and coagulating broth, I reminded myself of her hardihood. I also reasoned that I hadn’t just spilled liquid on her, I had spilled soup, soup that was so thick it was practically a sauce. And sauce doesn’t seep in, it just sits on, right?

After a few minutes, she looked good as new, and I resumed writing the newsletter.

Things were going well, my time with Ray Donovan was getting ever closer, when, all of a sudden, the letter ell stopped working.

“Ha. Hilarious,” I thought to myself. “I just must have tried spelling the word ‘look’ without its first letter. But ‘ook’ isn’t a word. That’s a riot.”

But then when I tried to correct my mistake, the ell remained invisible. I clicked it again. Then again. Then three times in succession, as you inexplicably do. But the computer wouldn’t respond. The letter was gone. And I was now forced to consider what life would be like with only 25 letters at my disposal.

I tried to remain calm. Maybe this was just a temporary glitch. Maybe she was still drying out. Maybe she was just sorting a few things out in her head, like you would after a concussion. At the very worst, I would just have to learn (‘earn) to live (‘ive) without ell. It was just one letter. There were synonyms. We could work this out.

Then the kay went.

Then the emm started having a semi-colon attached to it. Then the 8 was gone. Then sometimes the backspace button would only work part-time.

Interestingly, I only truly panicked when the backspace went wonky. Because, as we all know, we can’t reasonably expect to succeed in word processing without a backspace.

So I called Apple Support and asked them what to do, only marginally feeling humiliated that I’d done something so stupid as spill soup on my laptop because I was primarily feeling extremely, extremely hopeful. Apple Support people are smart, right? They would fix this. They would tell me everrrrrrrything was going to be just fine.

So he had me restart my computer. My beautiful, precious computer who has been with me through thick and thin. And nothing happened. She wouldn’t restart. She was done. It was over. And she smelled like chicken.

So, in the end, it was the most expensive trip to the airport I’ve ever taken. Right now, I’m in the basement working on my husband’s computer, a P.C. (shudder), which is still in pristine condition despite being 15 years old. I’m not sure when things will be back to normal or if any of my files will be restored from my Time Capsule. The only thing I do know is the Delta lounge did not make any money on me last week. For after my beloved’s death, I ate nearly every cookie in sight.

2 thoughts on “Chicken soup for the ‘oul”