Goal: To host a Chopped-style cooking competition/dinner party in which two teams (girls vs. boys) make dishes/drinks incorporating the above ingredients, which had been kept secret. We split into rotating teams of two and have three judges for each course. We allow 30 minutes each for cocktail and appetizer, 40 for main and 20 for dessert. We use anything in the kitchen, pantry and fridge we can find to help improve our dishes.

This happened at 3 p.m., when it occurred to me I was having people over in three hours. But not only did I not have to cook anything for their arrival, I wasn’t even allowed to.

Finding No. 2: Bourbon makes everything better

For their cocktail submission, William and Dwain raced to the liquor cabinet and decided on bourbon for the foundation of their drink. They added lemon, champagne, the St-Germain and used the lavender in a simple syrup. Then they grilled a lavender sprig and stuck it in the glass. Julie and I smoked our glasses with lavender smoke, added vodka, sparkling water, lemon and St-Germain and a whipped egg white. The smoke in the glass was lost; the drink was refreshing, but not strong or rounded enough. First round win: the boys.

Both teams decided on salmon cakes for their appetizer and got to work pulverizing the Wasa crackers to use as a filler. Sean and Dwain decided to make a remoulade with their pimento peppers and serve their cakes with grilled bread. Julie and Hannah incorporated the pimento into their cakes, along with parsley, onion and hot paprika. They topped them with avocado, tomato and sour cream. The girls’ salmon cake was tastier and much prettier. Second round win: the girls.

The girls went the safe route, given the ingredients for the main course, and decided to go for a green curry soup. We pulled out curry paste, ginger, garlic and coconut milk and cut the pork and leeks paper thin. We fried everything up and poured in a whoooooole bunch of chicken broth. With the yogurt, we made a sauce with cilantro and frizzled some shallots for a crunch factor. Finally, we added the ramen into the soup to cook (future tip: always cook your ramen separately from your soup because, in time, it will become one congealed glob).

The guys went the creative route. They found some dried mushrooms, soaked them, and threw the leeks on the grill. In the middle of their meal, the grill died and William ran frantically inside with a plate of raw pork. He threw it into the toaster oven and, using only a moderate amount of swear words, quickly started chopping onions and the mushrooms to make a stroganoff sauce featuring yogurt and sour cream. Sean started chopping the grilled leeks, finessed the sauce, and the chops cooked in time. They served their pork and sauce over the ramen.

In the end, the soup, though slightly boring, was better and prettier. Third round win: the girls, however style points for the guys. 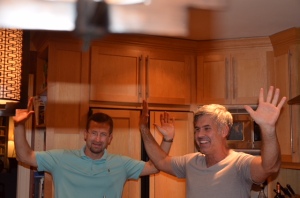 Highlight No. 5: Cotton candy is harder than it looks.

It doesn’t really matter what the girls made. Suffice it to say, I threw the cotton candy across the room and we won.

The guys, however, were on a mission. William dug out an old maple leaf-shaped cookie cutter, cut through the layers of filo with it and threw these leaf cakes in the oven. Then he proceeded to make a goat cheese and peanut butter sauce that may also have had some orange marmalade in it.

William ran and got a teaspoon and told Dwain to shape the cotton candy pieces into teaspoon-sized buttons.

Meanwhile, his maple leaves were out of the oven and the sauce — oh, but that sauce — was ready. He stuck the buttons onto the cakes M&M cookie style. Then he took a crème brûlée torch and started firing the whole thing before dousing it in the sauce.

In the end, we ate bread and butter for dessert.

I have never laughed so hard at a dinner party. I have also never done so many dishes. Or eaten so little at a meal. And I can’t wait to do it again.