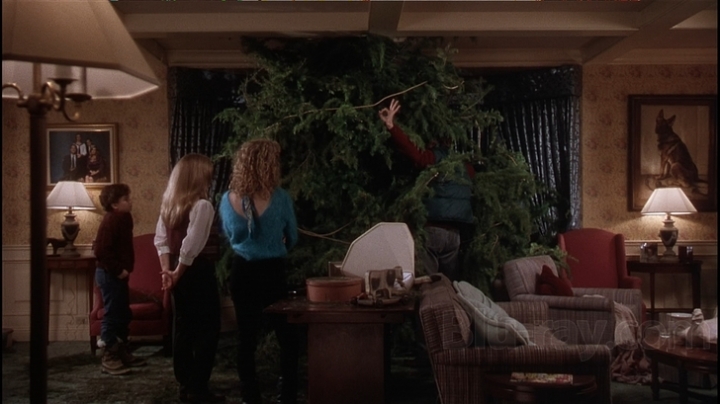 I was keenly aware while decorating for Christmas this year that Gabrielle, a soon-to-be college girl, won’t be here to help me in 2018. As such, I wanted us to really go out with a bang before our traditions dramatically change. That meant we had to get the biggest Christmas tree we’ve not only ever had, but seen.

Since Gabrielle was little, we have always had a live tree, which generally means picking up William’s dad’s pickup, heading to Lowe’s, choosing our specimen and returning home to wrestle it inside. But this year, we discovered that Owen’s Greenhouse delivers your Christmas tree for the fair price of 15 bones. And rather than go to the shop, they are happy to send you pictures of what trees would best suit your needs.

So, an hour after speaking to Ian at Owen’s, my phone beeped and up popped three photos of potential trees. As you would with a quarter or ruler to give a sense of size, they used a person to give us an idea of how tall these trees were. In this case, the person was 6 foot 8, wearing a yellow toboggan with matching yellow knee-high socks, which he was able to prominently display thanks to his green pantaloons. However, despite his very festive attire, this man looked decidedly forlorn in the photos, almost as if he were contemplating the meaning of life and coming up empty. We had a good chuckle over that, marveled over technology in 2017, and chose the biggest and fullest of the trees we saw.

The next day, it arrived, and William and I looked at each other and the beast that was now in our driveway. Actually, scratch that, I was not fully aware of how beasty the tree was while it was laying on its side. I was aware that Gabrielle, for whom we had bought the tree in order to maintain family traditions, was not at home, which tends to often be the case when it comes to 17-year-olds.

So William and I dragged this sucker in. Actually, he lifted and I lurched and eventually, oh so very, very eventually, we got the tree up in the stand in the living room.

I looked around our living room and everything in it had miniaturized, so that the lamps and tables seemed like they’d been set up in a dollhouse. Even our couch looked as if it were cowering. Our dog Fitz stood from behind the gate in the kitchen and chattered away, likely asking his parents what the hell they were thinking.

Because the tree was so big. In fact, it didn’t seem unreasonable to expect it to start talking. I had to wonder, with a sap-slow cadence and baritone bark, what wisdom it planned to impart.

Alas, unlike our talky Boston Terrier, who was dying, just dying to explore the Christmas tree, please, mom, please, this tree remained silent.

However, then it began to drink.

Within 24 hours, the tree had drank two gallons of water. After 48, four. A week later, an impressive 12. That’s easily more than all of our previous trees put together. And nine days later, it is still drinking.

By the way, if you’re ever in the mood to test the bonds of your marriage, buy a 20-foot tree and ask each other in eight-hour intervals if your spouse has “remembered to water the tree.”

Anyway, the next day, we started decorating it. William had to haul out the super-high ladder and I started unraveling the balls of lights. After seven of eight strands of lights were on, Gabrielle came home.

By the way, if you’re ever in the mood to test the bonds of your marriage, try stringing lights around a 20-foot tree.

If you’re ever in the mood to test how good a parent you are, try taking belated suggestions from a 17-year-old on light placement.

At any rate, finally it was time to start hanging ornaments. Now, I will admit, that this girl? The one over here typing on the laptop? She likes her some Christmas ornaments. I can remember where I bought every one and I can usually remember what I was thinking when I did. But as a result, we have a lot — repeat: a lot — of ornaments. Which is a good thing if you ever find yourself having to decorate a 20-foot tree. But it’s not that good if you’re 17 and you would kind of like to go to your room and text on the phone.

To Gabrielle’s credit, she was a trooper about it, only once very delicately asking, “Hey, and I just thought about this right now, how many more ornaments are left?”

And so our last live Christmas tree stands and drinks in our home. Next year, we move to artificial like the rest of the people who live on the sane side of Christmas. Until then, I’ll just stare at this wonder in our living room and try to soak up every last second of the holidays just as it soaks up every drop of water in its stand: “Hey, sweetie, did you remember …”