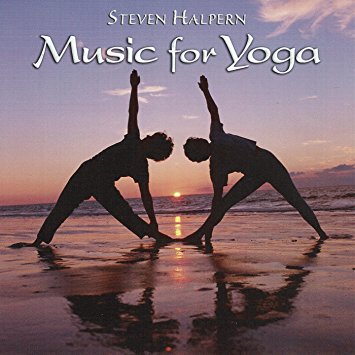 Right now, I’m listening to a song called “Cry of the Earth” on a CD entitled “Living in Harmony.”

It is playing, of course, on Pandora’s Yoga station, which I listen to nearly every time I write, which (and I know you’re not supposed to have two whiches in a sentence, but two witches is fine) has given me a lot of time to contemplate what makes a good and solid Yoga tune.

First off, water. Nearly essential in the Yoga music world. Water lapping and waves crashing (but not too aggressively) are commonly employed, as is falling rain. Occasionally, very occasionally, you’ll get thunder, but not that often because thunder can imply doom. Generally, the rain used sounds like it is falling on some very happy, quenched greenery. Like wet (but not soggy) ferns or perhaps a good rhododendron, though rodo leaves can sound slappy if you’re not careful.

Next up, incorporate your poignant strains of music. The pace at which these melodies plays is basically slo-mo, meaning it would fairly accompany the movement of snails, turtles and sloths, though you’re likely not meant to think of mollusks, reptiles or, frankly, weird, slow-moving mammals because those visuals might be too vivid. These strains are meant to be moving, mystical, thought-provoking, center-finding and chakra balancing. They are supposed to make you think you are on the brink of discovering the meaning of life and the answer to the meaning of life sounds like a pan flute.

That’s another thing about yoga music: its unique set of instruments. Djembe (an African drum made of goat skin hide, wood and rope), didgeridoo (Australian vibrating wooden tube thing), Tibetan singing bowl, Chinese gong, and the hammered dulcimer (née Civil War re-enactment camp?) all feature prominently in these songs. Even the tuning fork and wind chimes have roles to play. Think of any other style of music or artist (other than Paul Simon) that/who is so open to such a global variety of influences. I mean, we are impressed when rock incorporates a cow bell. That’s child’s play in the yoga world.

Interestingly, children laughing or even the human voice (not even a stray Om) really doesn’t factor into the good yoga song. Maybe it’s considered too secular or something, too much of a reminder that we’re mere mortals possibly not cut out for enlightenment.

The exception to that rule, of course, is the one and only Enya. Although whether or not she’s actually human, and not a sprite, fairy or pixie, is up for debate. About one in six songs on Pandora’s yoga station are courtesy of this musical genius. She hails from leprechaun-infested Ireland (coincidence? I think not) and is the proud author of CDs entitled “Shepherd Moons,” “The Memory of Trees,” and “A Day Without Rain.”

Boy, you know yoga musicians are jealous they didn’t come up with those CD title gems.

It sounds like I’m being sarcastic, but I actually really like Enya. In fact, she and I have had a long relationship, dating back to her Orinoco Flow days. Every Saturday morning, my mom would blast Enya while she was cleaning the house. Often, you could even hear her Siren call over the central vac.

For myself, I use yoga music as a kind of white noise, which probably isn’t that much of a compliment to yoga music producers. But I find it adds just enough to noise to drown out the quiet of the house and just enough quiet to absorb the barking of my puppy dog. And besides, who doesn’t like listening to waves?

Of course, that illusion is harshly shattered when Pandora lets its commercials loose. Mike Mandel and his My Pillow. Tide pods’s tomato soup duet. A few years ago, there was a barbecue smokehouse chain commercial that was so exuberantly promoting overeating and obesity that I actually felt guilty about having yogurt for breakfast. But when you think about it, it’s kind of hilarious that, at any minute, your serene yoga moment can be interrupted by KFC telling you how fingerlicking good it is.

At any rate, I’m listening to the station now and have been for the duration of the time I’ve been writing this column. As you can see, it helps me produce super smart, serious writing. Namaste.