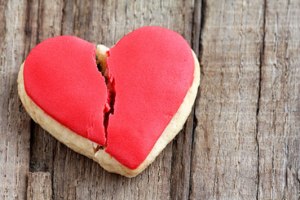 Oh, to get dumped. Even that expression, the idea of a person getting so discarded by another that they end up in a place where snotty Kleenexes mash with slimy banana peels, it makes me wince. There is nothing worse in the world of love, is there? I mean, death, I guess death is worse, but when you’re in the midst of a breakup, there is a part of you that thinks death might not be. That if you died or the person who broke your heart died, you’d at least not have been told they don’t like you anymore.

But after you’ve been told that, after that stunning moment when the world starts moving in slow-mo and your vocabulary is reduced to monosyllables, the most readily available of which is “noooooooooo,” several interesting things occur.

First up? How much you want to talk to them after. This breakup phase usually takes place after your girlfriends have left and the scaffolding they built for you to keep you from falling into a pit of despair has melted in tandem with your Ben & Jerry’s Boom Chocolatta. You start to feel twitchy. Your fingers feel this urge to dial. You really feel like, given the opportunity, you can talk this out.

Keep in mind, this person has just told you they don’t really want anything to do with you anymore. But still. You forget that part. You feel like if you could just get them on the phone you could be quippy. Sage. Persuasive. If you could be funny and smart enough, maybe he would reconsider and you could go ahead with your weekend plans of seeing Titanic together, followed by dinner at The Swizzler where you won’t have sour cream on your baked potato because you’ve never looked as kickass as you have since you’ve been with this person and you’re not about to stop now.

Then, thinking of your weekend, you think, wait. We had plans. This person made plans with me. So obviously this breakup was completely out of left field. This person hasn’t thought this through. This person must have just been having a bad day. So now you feel even more compelled to call. And not only that, you decide within yourself that you’re going to be forgiving. You are going to give them an out.

“It’s OK,” you can hear yourself saying. “No sweat. You made a mistake. Let’s go get Slurpees.”

But then something happens. You call your mom instead or your mom comes home, depending on whether or not you still live at home while pursuing the English degree that you’ll eventually realize has made you qualified to be nothing but a secretary. And your mom? She’s great. She tells you how wonderful you are and how this person didn’t deserve you. She tells you that everyone has been through it and this is what really living all the way feels like. And she’s proud of you that you live all the way and you don’t play it safe. And she knows that you really liked this person, but all the while, she really didn’t, he was a little nerdy and, well, short for her taste.

You’re not quite ready to hear this criticism because you’re pretty sure you’ll be back together with this person in four hours. And what you liked best about him was that he was nerdy. That he wore a 90210 T-shirt in the most ironic way and it meant he had a great sense of humor.

But you try not to think of that for now as you cry on your mom’s shoulder. And while she is telling you, “Don’t, under any circumstances, call him,” you are thinking about how long you should reasonably wait to do just that. You think about his class schedule, because you know it by heart because you’re a great girlfriend, and realize he’s in Intro to Physics right now (because he’s sciencey and you love that about him) and so you shouldn’t call him now because he won’t be home anyway. You’ll call him at 9 p.m. And then the two of you will go get Slurpees. Because you’ll be thirsty by then anyway so it will work out great.

Writing about this 21 years, eight months, six weeks, four days and three hours later, I realize now how complex a subject this is, one I’ll have to continue discussing next week. Because after 792 words, I’ve only scratched the surface of heartbreak. We haven’t even touched on the psychosis that erupts while you’re waiting for him to call you. So maybe, if you’ll allow, we’ll embark on a heartbreak trilogy. Three weeks of getting it all out there, dumped to dumped, dumpee to dumpee. You in?

One thought on “The breakup trilogy: Part 1”