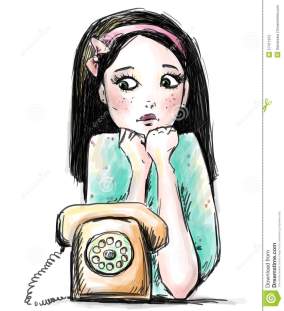 So you’ve been dumped. It’s been 24 hours, almost 25, and you’ve managed by the skin of your teeth not to do anything about it. Not to mail out the long letter that you have written on the pages of your notebook, the cover of which has a picture of two elderly people holding hands as they walk into the ocean nude, the same two people you imagined would be yourself and your love in 65, make it 100, years.

You have not called him, though you have picked up the receiver 742 times and have made 312 half-dials of his phone number.

You haven’t driven past his house, not because it seems like an unreasonable thing to do to you, but because it might seem weird to this person if they randomly looked outside and saw you parked there with googly eyes and lips sometimes agape, sometimes mouthing a silent plea.

After 25, nearly 26, hours, you feel pretty good about yourself. You are still, to be clear, 100 percent convinced this breakup is a blip, that there will be a reunion, a steamy one, any moment now during which this person admits his mistake and expresses the appropriate amount (i.e. heaps) of remorse. But still. You’ve survived so far.

So you go on with the new day. You get your backpack on, you drive to University of Winnipeg, you go to sociology class with Dr. Skoog, a class that you will for the next 21 years dream you didn’t attend and now here you are at the exam and you know nothing so you’re going to fail and you’re not going to graduate after all.

You do these things. You make it through. You make it through why? Because you know, when you return home after eight hours of classes and studying, that there is going to be a blinking light on your answering machine and it’s going to be him and things are going to go back to normal. There is a part of you, an unconscious one albeit, that knows this is the only thing that is keeping you together.

When you return home, there is no blinking light. Well actually, there is a blinking light but its message is from your aunt. And you think, “Why, Auntie Angie? Why of all the times in the history of my life did you need to call me and leave a message not expressing why you called, but just asking me to call you?”

It’s at this point, say, oh, 36 hours in, you start to feel the first pangs of doubt, that this person really did mean what he said. It’s a flashing thought, kind of like sheet lightning. Not something that is accompanied by thunder or makes a forking impression, but it does produce illumination. You think this as you stare at your silent telephone, the blue one with the grey numbers whose buttons are a real joy to press, the buttons of all buttons.

Over the next week, you spend a lot of time staring at that telephone. You clean it with a toothpick. You pick it up 20 times and make sure it’s working. Your back is a little tired from the gargoyle-like position you sit in as you stare at it. But it doesn’t bother you too much, not enough to move for anything: eating, sleeping, showering, tooth brushing. All you have the energy for at this point is a whole lot of sighing anyway.

And what a sigh. Filled with despair. Appropriately breathy, occasionally graduating into a moan. Every once in a while you say, “Come on!” to your phone, willing it to work with you and ring.

I write this now fully aware that when I had my heart stomped on, mashed, really, with the heel of a large boot, and it was left to squirt every once in a while for dramatic effect (phht, phht, phht) on the floor of Riddell Cafeteria, I was actually lucky it was the 1990s and not 2016.

I only had to contend with the phone in my room, which I could have theoretically gotten away from with relative ease. With all the technology today, breakups have got to be doubly hard. You always have your phone with you, that’s a). And, b), you could be contacted in a multitude of ways: Facebook, Instagram, Twitter, what have you. And even if he doesn’t contact you, you have the ability to see what is still going on in his life and then, in turn, are afforded the opportunity to spend countless hours trying to interpret if he’s really happy in the photo he just posted or smiling bravely through tears. Is his finger on the verge of dialing or pecking? Does it appear poised?

Anyway, in the end, he didn’t call. I didn’t call him. Until he did three (Was it four? Oh, thank you, Time That Heals All Wounds) weeks later. And then?