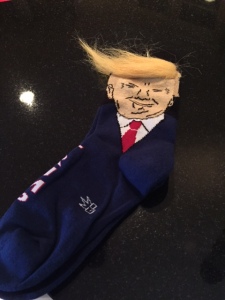 In a couple of days, I’ll be able to give my stepdad Peter his birthday gifts: a pair of Donald Trump socks and The Hitchhiker’s Guide to the Galaxy. I know he’s going to like to them and I know when he opens his gifts he’ll have this little smile on his face, this grin, actually. Then he’ll say, in an exaggerated voice, “Thaaaaaank you” and spend the next half hour inspecting every aspect of his new acquisitions.

The fact that he’ll appreciate such oddball gifts (and will, likely, wear the socks) speaks to what a cool guy Peter is.

I met him when I was 21. Though he lived in Calgary, he and my mom had started carefully dating and it was time for him to meet us kids. I actually don’t remember anything about that first encounter — in a way, Peter feels like he’s just always been in my life — but I do know I liked him so much and so immediately I almost felt guilty about it.

But Peter is that way: so entirely interesting to be around. First off, he has the most fascinating stories to tell. He’s been caught for speeding by German police. He’s sold a Lamborghini to a “gentleman” who paid him in cash and didn’t even take it for a test drive. He’s had an Uzi pointed at him because he’d strayed too far from an airport tarmac in Brazil. He chose a live fish from a tank so he could have it cooked for him at a restaurant in Japan. With his low voice and his patient story-telling technique, he can keep an entire table rapt for an hour at a time.

This rarely happens, however. Though standing strong at 6’6”, Peter is a quiet man, opting to listen and absorb over being the life of the party.

Peter was born in Melbourne and came to Canada in 1967 in time for the World’s Fair in Montreal. He arrived by steamer ship with a pittance in his pocket, found a job managing a parking lot, and had the summer of his life partying in Quebec. After that, he was off to seek his fortune in the States, and eventually settled in Calgary. In the meantime, he had bought and sold nearly every exotic supercar known to man, often living off of crumbs, sleeping on floors, doing whatever he had to do before he made his next sale.

He eventually built a business selling car parts. He researched what parts were likely to wear out quickly in certain models and then went to Taiwan, China, Japan and wherever else necessary to buy those parts in bulk. Then he would sell them to dealerships. It was an extremely successful enterprise.

Keep in mind, Peter dropped out of school at the age of 15. Yet, he is one of the most educated people I’ve ever met. He is constantly reading and researching, nearly singled handedly keeping Google in business. Honestly, I try to avoid talking to him about current events sometimes because I am reminded just how much more time I should spend reading the news.

Apart from cars, his passions include travel, my mom, Australian wine, salmon and “shrimps” on the barbie, and, well, hating Air Canada. The subject of airline travel will spur the telling of a whole new set of amusing stories, ones in which Peter is often standing firm and getting exactly what he wants. That’s another thing I’ve learned about Peter: He isn’t afraid. He’s the guy at the ticket counter who won’t take no for an answer. But he does so in a calm, mostly polite, very articulate way. I imagine that’s exactly how he was in business, too, and what was the secret to his success.

Happily, Peter also loves me. Like, a lot. And as we gather to celebrate his 70th birthday next week, I want to tell him just how much he means to me. He was the one who introduced Matthew and I to Europe. He’s shown our whole family Australia. He’s taught us to ski. He’s taught me the power of poise. He’s listened to me bawl about my dad. He’s always there to pick me up from the airport. He’s loved my husband like a son. He’s been the always jovial Popsicle Pete to my step-daughter. He’s planned entire trips for all of us without complaint. He’s always just quietly, assuredly, resourcefully there and I can’t tell you how much that improves your life, to have someone like that.

So happy birthday, Y.O.D. (Your Other Dad)

Love always, Y.O.D. (Your Only Daughter)