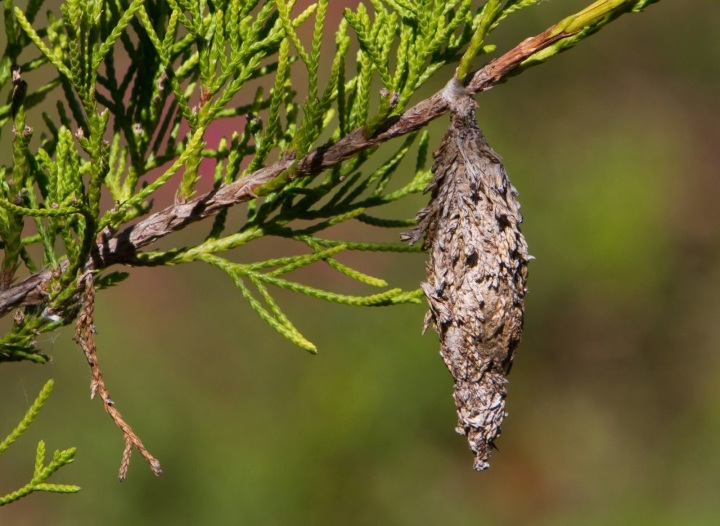 So there I was out on the deck. It was early evening, so hot it felt aggressive, so humid the air was spongy. I was on my way to the garden to pick a peck of peppers, pretending my name was Peter, trying to think only of words that start with the letter P.

But then I passed the three arborvitaes that we have potted on the deck. They’ve been there for years and I’ve developed quite an affection for them, in no small part because they require zero attention. About once a year I remember to throw some fertilizer on them, fertilizer meant for vegetables and flowers, not a coniferous tree of the cypress family, but bah, who’s in the mood to split hairs.

But this time as I passed, I noticed the second of the three trees seemed to have quite a bit of brown on it. I wasn’t shocked, since the pots they live in aren’t heavy enough and so the trees are prone to blowing over during storms.

Still, this tree seemed particularly unhappy, especially for a happy-go-lucky arborvitae. So I took a step closer. That’s when I noticed the tree had these brown, spindle-shaped bundles hanging off the end of many of its branches. Upon even closer examination, I realized they looked exactly like retro Christmas decorations, albeit very, very depressing ones. And so to get an even closer examination, I leaned in, nearly touching my nose to the spindle.

And then it moved.

At the time, I was marginally aware that using your kid to check something out that might well be the home of, a), a tarantula or, b), a small alien probably wasn’t earning me an A on the ole parenting report card. Further damaging my step-reputation was the fact that I broached the subject by telling her I wanted to show her something “cool.” Insert uncomfortable emoji face here.

So Gabrielle dutifully came out on the back deck with me so we could examine the moving arborvitae. The sun had started to set, but it continued to be otherworldly hot outside. I started performing deep breaths and Gabrielle looked back at me like I had two heads but no brain in either one. Luckily for me, when you’re 16, you’re so annoyed by and dismissive of your parents on a constant basis, you don’t necessarily pick up on when you should be alerted by them.

So I carefully showed her the moving Christmas spindle and told her to watch it. Sure enough, it moved again, albeit slightly. So slightly, in fact, that it could have been the wind. We waited and watched. The heat was so intense it hummed. We watched and waited. Gabrielle was just about to head back inside when it moved again. This time surely. With intention and perhaps a bit of attitude.

The kid became curiouser and curiouser, leaning more into the tree. Because she was in front of me acting as a shield, I leaned in too. And then all of a sudden, all of a freaking sudden, a head popped out of the brown spindle. A striped, bald, primordial head. A striped, bald head connected to a body still within the spindle. A body that could feature thorns or contain poison.

Now is the right time, I feel, to talk about the word “emerge.” To come forth into view or notice, as from concealment or obscurity. To illustrate the use of the word, the dictionary gives the example, “A ghost emerging from the grave.” It’s an excellent example as I feel the word “emerge” is almost never associated with something good, cute or painless. My example for the word “emerge” will forever after be: “A bag worm emerged from its nest and scared the living daylights out of the teen and the immoral stepmother.”

One thought on “A tale of emergence”